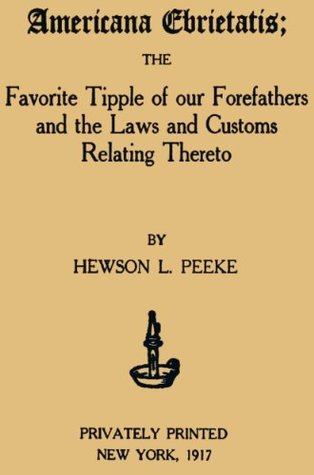 It is not easy for us to understand the significance of alcoholic beverages in XVII Century’s British Colonies. Today, we drink alcohol for our pleasure, not because we need to. We drink spirits for the sake of the taste, of feeling exhilarated, of being in good company, etc. but we do not actually need spirits. They are an extra, a little luxury that we treat ourselves to. But back then, things were very different and alcoholic beverages actually fulfilled a far more important task.

As Hewson L. Peek writes in his delightful “ Americana Ebrietatis” first published in 1917, “At the time when America was settled, no European people drank water as we do today for a constant beverage. The English drank ale, the Dutch beer, the French and Spanish light wines, for everyday use. Hence it seemed to the colonists a dangerous experiment to drink water in the New World.”

We have to remember that in XVII century’s England water was something to be wary of. It was not advisable to wash oneself too much, or to drink water on a regular basis. Many, both doctors and common people, considered it dangerous for the health. There was certainly a grain of truth in this belief: water-pipes and sewers were non-existent, and water was badly stored in wooden casks, therefore it was often polluted, and always of poor quality. To drink, to quench one’s thirst, one had to resort to beer and, for those who could afford it, to the more expensive wine. Beer and wine were considered the most suitable drinks for everyday life, and probably they really were, since the alcohol in them clearly had an antiseptic function. They were also nutritious. In a world perpetually on the brink of starvation, beer was an important addition to the everyday diet of the lower classes. “Teetotalism would have been quite unintelligible to the farmer or burgher of those healthy days of breezy activity out of the doors” (Peek).

Why would a grown man in a civilized society drink water? It was something odd, noteworthy: “It was not accounted a strange thing in those days to drink water”; thus, in a book published in London in 1654, a colonist recounts the hardships of the first days. Then, after recalling the shortage of food and the bitter cold too, he adds “ and most began to repent when their strong Beer and full cups ran as small as water in a large Land”.

For some time, also distilled beverages had come into common use, and they were considered as wholesome and nourishing as wine and beer. Moreover, to distilled beverages were attributed healing, medicinal properties, useful to treat many diseases. Besides, they provided warmth in the long, chilly winters. And then, of course, people drank for the feeling of intoxication, in order to experience a moment of joy and oblivion in an otherwise hard, drab and dangerous life. In short, for the colonists alcoholic beverages were an absolute necessity. And at the beginning it was necessary to take them all the way from England, or get hold of malt to make them.

As early as 1643, in Virginia colonists were already distilling. We know it because that year, worried by the “general scandal” of heavy drinking, the local authorities decided that “no debts for wine imported nor for strong waters distilled and made in the colony should be recoverable in any Court in the Colony”. And also archeological work conducted in Virginia corroborates the documentary records. But in spite of this early start, commercial distilling did not develop in Virginia during the colonial period. The American distilling industry started instead much further up North, in Puritan Boston, Massachusetts Bay.

Even in the preparation stage of the first voyages, Puritan leaders advised the colonists to take with them an adequate supply of alcoholic beverages. Reverend Francis Higginson, the first Minister at Salem in 1629, wrote:

“Therefore be sure to furnish yourself with things fitting to be had before you come: as meale for breads, malt for drinke, woolen and linnen cloath …”

In the same year, the Massachusetts Bay Company sent Rev Samuel Skelton there too, whom they supplied with food, clothes and the wherewithal to live, including “one gall. Aquavite” and “five qu. of stronge water”.

Incidentally, I thought that the terms aquavite (water of life), strong water, hot water and similar were the same thing at the time, but it seems that I was wrong because two different words in the same list must have meant two different things. However, the stocks were bound to run out sooner or later, and it was extremely expensive to have beer, wine etc. brought over from Europe; therefore, from the very beginning the colonists tried to produce alcoholic beverages themselves using fruit, grain and also imported molasses to brew beer.

“If barley be wanting to make into malt,

We must be content and think it no fault,

For we can make liquor to sweeten our lips,

Of pumpkins, and parsnips, and walnut-tree chips”

They also tried to grow vines, but without success.

In one case they were immediately successful: apples were not native of North America, but grew well in New England. Apples naturally fermented at about 7% abv to make hard cider. As Georg Francis Dow writes in “Every Day Life in the Massachusetts Bay Colony” (1935):

“Cider mills were found on a great many farms where the apples, which were mostly natural fruit, were made into cider. This was a common drink and found a place upon the table three times a day with each meal, and was carried into the fields to quench thirst forenoon and afternoon. The men of those days assumed to be unable to labor without a liberal supply of cider, as water seldom agreed with them.”

They also distilled cider to make the so called “applejack”. And in the Southern colonies also peach brandies were popular. But the colonists were accustomed to drinking much better stuff in England, and they were not prepared to give it up. With part of the grain of the first harvests they soon started to brew beer and to distill grain-spirit, whisky, even though at the time the word had not come into common use.

The Mayflower arrived in 1620 and as early as 1648 Emmanuel Downing, Governor John Winthrop’s brother-in-law, claimed that his spirit was better than the imported one. But he had a big problem: shortage of raw material. The local production of grain was scarce, and it constituted the staple diet of the majority of the population. Giving up part of the grain crops to distill it was costly, dangerous and, in any case, there wasn’t enough. His wife Lucy gets to the heart of the problem in a letter to her brother, written on 17th December 1648:

“Our stillings might be pritty strong but that all the rye was eaten up allmost before the Indian [corn] was gathered. Could you but teach us to kern [i.e. To make] rye out of the sea watter, that invention, I question not, would quicklye make the still vapor as far as pecoite [i.e. Pequot], and the Indians I beleev would like that smoake very well for the English here have but 2 objections against it, one it’s too dear, 2 not enough to it. Cure those, and we might all have implayment enought at Salem to make liquors, and as it is we could have custome ten time more than pay.”

Of course Lucy Winthrop couldn’t know it, but before long the solution to the shortage of grain to distill would come right from the sea. It wasn’t rye, wheat or another kind of grain. It was instead a dark, thick liquid, sticky and cloying. It had an exotic name: molasses.