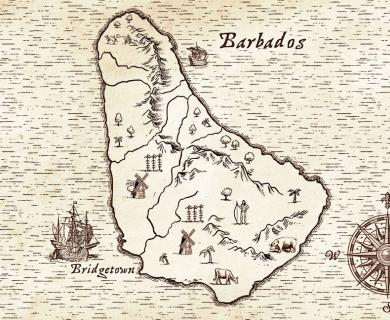 After 1650, Barbados was a big producer of sugar and therefore the richest colony of the rising English Empire: “the most flourishing Island in all those American parts” as a contemporary wrote. Barbados and the other little islands of the West Indies were far richer than the mainland colonies! Just to give you an idea, the wealth deriving from sugar can be compared to the wealth given today – or maybe better some years ago – by oil.

The profits made from sugar were so high that nearly all available land was devoted to sugarcane cultivation. As a consequence, Barbados had to import everything. Not only luxury goods for the élite of the planters, but also the daily food for the mass of the poor white farmhands and the slaves. Moreover, they needed plenty of timber for the buildings, the barrels and the fires necessary to process the sugar. And all the products had to be purchased in big quantities and at a low cost; it was unthinkable to get them from Europe. Luckily there were the Mainland Colonies. They were much closer, covered with enormous forests, with large fertile fields and some of the richest fishing grounds in the world, the Grand Banks. From the very beginning, there was a flourishing trade between Barbados and the Mainland Colonies.

“… pleased the Lord to open to us a trade with Barbados and other Islands in the West Indies, which as it proved gainful, so the commodities we had in exchange there for our cattle and provisions, as sugar, cotton, tobacco, and indigo, were a good help to discharge our engagements in England” writes John Winthrop in 1647.

And as early as 1660 a mariner declared before the English Privy Council that Massachusetts Bay had become:

“… the key to the Indies, without which Jamaica, Barbadoes, and the Caribbee Islands are not be able to subsist, there being many thousands tons of provisions, as beef pork, peas, biscuit, fish, carried to Spain, Portugal, and Indies every year, besides sufficient for the country’s use”.

Historians speak about a British America which stretched from Barbados in the South as far as Canada in the North. The ties between Barbados and the future US were not only commercial. The young Englishmen who left for Barbados as indentured servants did so because they hoped to be able to buy a small piece of land at the end of their service. But the high profits from sugar caused the price of land to increase rapidly, and as early as 1650 it had become impossible to buy good land without having large amounts of money. Many decided to emigrate again and thousands went to the Mainland Colonies. Therefore, vessel traffic was intense, families and individuals were always on the go and many strong relationships, based on family, friendship and business connected the Mainland Colonies with the West Indies and first of all with Barbados.

It is perhaps no coincidence that all along his life, George Washington left North America just one time, for a voyage to Barbados in 1751. The central importance of plantations, the massive resort to slavery, the development of a local gentry of planters, possibly even the title of “President” for its ruler, are some of the distinctive features that the US owe to those far-away, today almost forgotten ties with Barbados.

But back to trade – what did Barbados give in exchange for the many goods it bought from the colonies? Barbados offered letters of credit, which were used to buy from England the commodities the colonies needed. It offered also slaves, sugar, molasses, which was used at the beginning as a cheap sweetener, and rum. As early as the middle of XVII century, when it was still unknown in England, the American colonists commonly drank rum. A lot of it. As well as drinking it, the colonists used rum as a trade commodity with the Indians, who loved it. They used it also as a currency. Money was chronically scarce in the colonies and the colonists largely relied on barter, but they needed something fit to be a reliable unity of measure of the value of the goods. And rum was perfect: it was always in large demand, easy to add and divide and relatively easy to transport; moreover it did not deteriorate with the time In short, rum was a sort of lubricant which oiled the wheels of American economic and social life. And of the political life too, as we will see in the next article.