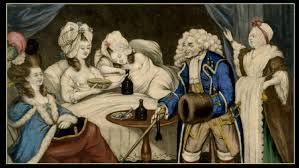 In the second half of the XVII century, when rum started its triumphal march, leaving Portuguese Brazil in its relative isolation, three great colonial Empires divided up most of the Americas.

The Spanish Empire dominated most of mainland South and Central America – the so called Spanish Main – with the main Caribbean islands, Cuba, Portorico, part of Santo Domingo. To the North Spanish power was firmly established in Mexico and its influence reached up to modern day Georgia. In Mainland America, the French Empire kept New France, which roughly corresponds to modern day East Canada, and in the Caribbean Martinique, some smaller islands and part of Santo Domingo (now Haiti) under its tight control. The English Empire occupied Virginia, New England and other Mainland colonies and in the Caribbean Barbados, Jamaica and other smaller islands. Sugarcane was grown everywhere in tropical areas, therefore rum could be produced by all the three empires. But the choices of the three European countries were completely different.

Over time, a long succession of laws were introduced, which forbade distillation, with the most brutal punishments. These laws were not always fully enforced (through and through), but surely they negatively affected the development of rum production. To this we must add the decline of sugar production, which has not yet been fully explained by historians, and a diminished fondness of Spanish people for strong distilled beverages. As a result, rum production in the Spanish colonies was, for a long time, limited and of low quality.

France too was a great producer and exporter of wine and brandy and French producers too feared the competition of rum. But things went slightly differently. In the second half of the XVII century there seems to have been extensive rum production right in France, by using the syrups which were the by-product of the refining of Antillan sugar, which took place largely in France. Then, brandy producers struck back and succeeded in obtaining various bans and restrictions on the production of rum and other distilled beverages. In 1713 they even obtained a Royal Decree which forbade the use of any raw material other than wine for the distillation of spirits. I have not pursued this matter and there is no general consensus among the sources, but anyway, after 1713 rum production and sale were really forbidden in France, but de facto tolerated in the colonies. In particular, great quantities of rum and molasses were later exported, indeed often smuggled, into the English colonies of North America.

England did not produce wine or brandy. On the other hand, English people drank heavily, they had always done. They imported wine and brandy mainly from France and Spain. And they paid good money for them, it was a constant flow of wealth which left the English shores to boost the coffers of foreign countries. For centuries it had not been considered a problem and anyway there were no solutions. But then things changed. After the Act of Union of 1707, Great Britain was one of the great European and world powers. Its foreign policy had two fundamental objectives: to strengthen its global role, by defending and expanding its colonial, commercial empire, and to maintain the balance of powers in Europe, in order to prevent a single country from becoming so strong as to dominate the whole continent. (It may be thought that this general approach underlies British foreign policy even today). Both objectives brought Britain to fight numerous wars and especially to clash with France, its only real competitor in the fight for supremacy – many different wars that, according to some historians, were different phases of a new Hundred Years’ War, fought between 1689 and 1815.

It became therefore increasingly intolerable for the British Government to finance the enemy through massive imports of wine and brandy, bought especially from France and Spain. An alternative to wine was soon found. Trade agreements were signed with Portugal, and Portuguese wine largely replaced French wine, thanks to the fondness of English people for sweet wines. But brandy was a different kettle of fish, the English ruling classes loved it and did not want to do without it, while the lower classes consumed enormous quantities of a new drink, gin. And that was a big problem too, both because consumption was excessive and destructive (we will get back to this point) and because gin is made from grain, much needed to make bread, the staple diet of the lower classes.

Motivated by the need to curb the massive spread of gin and drunkenness of the lower classes, and the danger of famine due to shortage of grain, Parliament intervened with various laws and measures that greatly limited the production and consumption of gin. Then someone discovered rum. Rum was produced in the English colonies, consequently the wealth which went into buying it stayed at home. To make rum you do not need precious grain, but the by-products of sugar production, useless, cheap and available in huge quantities. It is therefore the perfect spirit to replace both brandy and gin.

But at the beginning of 1700 rum consumption was very low, and British people still did not know it. Moreover, the upper classes did not consider it suitable for themselves: it was rough, not refined enough, too cheap. In order for it to be able to replace brandy it necessary to make people acquainted with it, to get them used to drinking it, but at the same time also to enhance its image and its price. It was not an easy task, but West Indian planters, Parliament, Governments and civil servants in general joined forces to launch what today we would call a massive, aggressive campaign to promote rum. The readers who should be interested in this can read my articles in the magazine GOT RUM?.

Anyway, they made it. Here are some figures: in 1697 England and Wales imported (legally) only 22 gallons of rum. In 1710 22.000 gallons. In 1733 500.000 gallons! And, from 1741 on rum imports regularly exceeded those of brandy. It was not just a temporary increase, it was much more: rum penetrated deeply the daily life and the culture of British people, who learnt to perceive ita s though it was their own, a sign of identity. Until yesterday, maybe even until today. An unqualified success. A lesson in marketing compared with which modern promotional campaigns pale.

The British Empire became the most important producer and consumer of rum and in the eve of the American Revolution, rum was usually considered something typically British.

One thought on “American Rum: a British spirit”