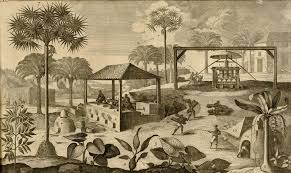 The first real account of rum production in Martinique can be found in the book “Histoire Generale des Antilles Habitèes por les François” written by Jean Baptiste Du Tertre and published in Paris in 1667. Du Tertre was a Dominican friar and a man of science. In 1640 he was sent as a missionary to the French Antilles and he stayed there until 1658. He also had the makings of an anthropologist, curious and attentive to the customs of the natives, a very French thing actually. Ligon had drawn a scale technical map. Du Tertre, on the contrary, draws a real picture, with attention to the aesthetic aspect and an evident interest in the natural environment and the people.

On the top left-hand side, under a rectangular wooden structure, you can clearly see the mill for the squeezing of the cane. The mill has three vertical rollers and it is powered by the push of a pair of oxen yoked to a long beam and led by a driver.

From the mill, through a pipe, the juice goes down towards a hut without walls where it is put to boil in the coppers heated by a fire. Some slaves are at work here.

But the most interesting thing for us is the structure indicated by the number 4, to the left of the coppers. Du Tertre calls it vinaigrerie. The drawing shows only one pot still, in the open air, with a simple pipe which channels the vapors of alcohol through a wooden barrel filled with water to cool them, into a cistern for the distillate. I haven’t been able to find the fermentation wash. The pot still is similar to those drawn in the books of distillation of the time. The presence of just one pot still suggests that the technique was less advanced and possibly the product worse, or anyway that the French colonists of Martinique devoted less attention to rum than the English colonists of Barbados did.

In our modern world, Anglo-Saxon cultural hegemony is a fact. Another irrefutable historical fact is that for centuries the English, or better the British, were by far the biggest producers and consumers of rum all over the world. All this explains why the attention of academics, popularizers and enthusiasts has focused on Barbados and much less on Martinique. But the facts are clear: the cultivation of cane, the production of sugar and the distillation of rum, on the two islands, happened at the same time.

Or maybe it was Martinique that arrived first. According to Prof Bertie Mandelbatt in her “Atlantic Consumption of French Rum and Brandy and Economic Growth in the Seventeenth – and Eighteenth –Century Caribbean”(2011), “ In 1639, as the first sugar mills were being constructed on Martinique and Guadeloupe and a mere four years after the French had arrived on the two islands, the exclusive privilege to produce and trade ‘sugar cane brandy’ from Martinique and St Christophe was granted to a M. Fague by the Compagnie des Isles d’Amerique, the chartered commercial company responsible for French colonization in the Caribbean during this period.” So it seems that we have evidence that in Martinique they produced rum in 1639, 8 years before the arrival of Richard Ligon in Barbados, and 18 years before the publication of his book.

It is outside the scope of this series of articles, but the contemporary origin of rum production in English Barbados and French Martinique, and even more the possibility that it began in Martinique a little before that in Barbados, could also shed new light on the thorny issueof the origin of the very word Rum.