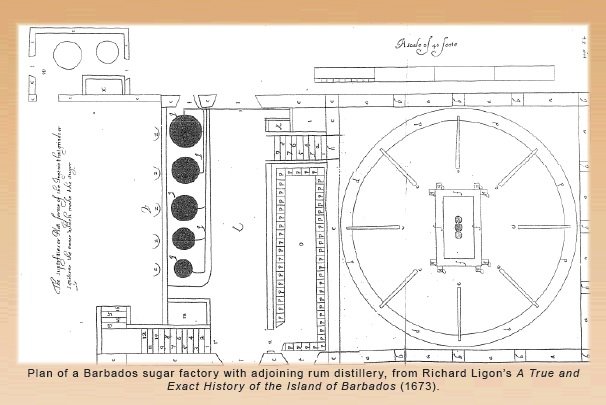 On this picture you can see the plan of a sugar factory in Barbados in 1647 drawn to scale by Ligon. As far as I know, it is the first known plan of a rum distillery. It is not easy to understand. And it would take a knowledge of the production techniques of the time which I don’t have. But the essential things are quite easy to grasp.

The three black dots at the center of the circle at the bottom are the three vertical rollerswhich crushed the cane. They were powered by the strength of the animals tied to the spokesconverging towards the center. Ligon calls this part of the structure with the Spanish word ingenio. The juice squeezed went directly into the Cisterns I and K higher up on the right.

Then the juice was put to boil in big coppers. These are the 5 big black circles on the top. First, the juice boiled in the biggest copper, then in the smaller ones until it became sugar. During the boiling the skimmings, that is, the scum and the substances floating on the boiling copper, were taken away and they were first fermented and then distilled.

The distillery is the rectangle in the top left  corner of the drawing. You can see the rectangular washfor the collection and fermentation of the liquid, X. The two white circles at the sides of the wash are the pot stills. A bigger one for the first distillation of the fermented liquid and the production of what Ligon called “Low Wines”. The smaller one probably still distilled the Low wines again and produced the final drink.

The presence of two pot stills and the double distillation show a rather advanced technique and a certain attention to the quality of the product.

Ligon was also skilled at technical design and his is a scale map. So we know that the washcould contain several hundreds of gallons. And the stills?

“Although Ligon did not mention the exact capacity of the stills illustrated in the still house, his plan showed that one still was slightly more than four feet in diameter and the second … was slightly less than four feet in diameter. Both stills fit into a still-house room no larger than 16 feet long, 10 feet wide, and 20 feet high. The capacity of the two stills probably reflected contemporary trends in Europe and held less than100 gallon each.”