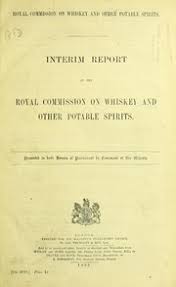 We are now into the third article of this series. It focuses on the various kinds of rum produced in the British Colonies, not just in Jamaica, and on the way consumers’ taste had been veering towards more neutral, rectified spirits. We’ll discover that the major producer was not Jamaica, but Demerara, and that even the iconic Navy Rum was made from Demerara Rum. About the definition of rum, the opinion of the first witness, Mr. Man, is radically different from that of Mr. Nolan, which we read in the last article. Then, we’ll get back to highly flavoured rums. Using these, in Germany they produced the so-called Rum Verschnitt (more or less, blended rum). It was a cheap, very popular spirit, made mostly from potato spirit and with a little highly-flavoured rum. As far as I know, in Germany a little production of  Rum Verschnitt continues to this day  (see: https://mixology.eu/en/the-roots-of-german-rum/).

13015.Do you mean by “the other sorts” the varieties produced by the patent still?  – Yes, what we call proof rums. There are two sorts – Jamaica rum is one sort and then everything else is proof rum. Proof rum necessarily is sold by the proof gallon which varies according to strength.

[So, the growth in rum consumption in those years regarded mainly rum made by Patent still. Consumers preferred it to Pot Still rum maybe because it was a more neutral spirit, low in congeners. And something similar, a Commissioner had said earlier, was happening to whiskey. It would appear that in that period the public’s taste was evolving towards rectified, lighter Spirits, easier to drink. It is indeed also the period of the great, lasting, worldwide success of  the Ron Lìgero  made in Cuba]

[We have now a testimony which does not concern rum directly, but the use of molasses to make gin. I find it extremely interesting though, as it sheds lights on how the spirits industry worked in the past.]

Well, I hope you have found this stuff interesting; more to come in the next articles.

PS: I published this article on March 2020 in the “Got Rum?” magazine. If you want to read my articles and to be constantly updated about the rum world, visit www.gotrum.com