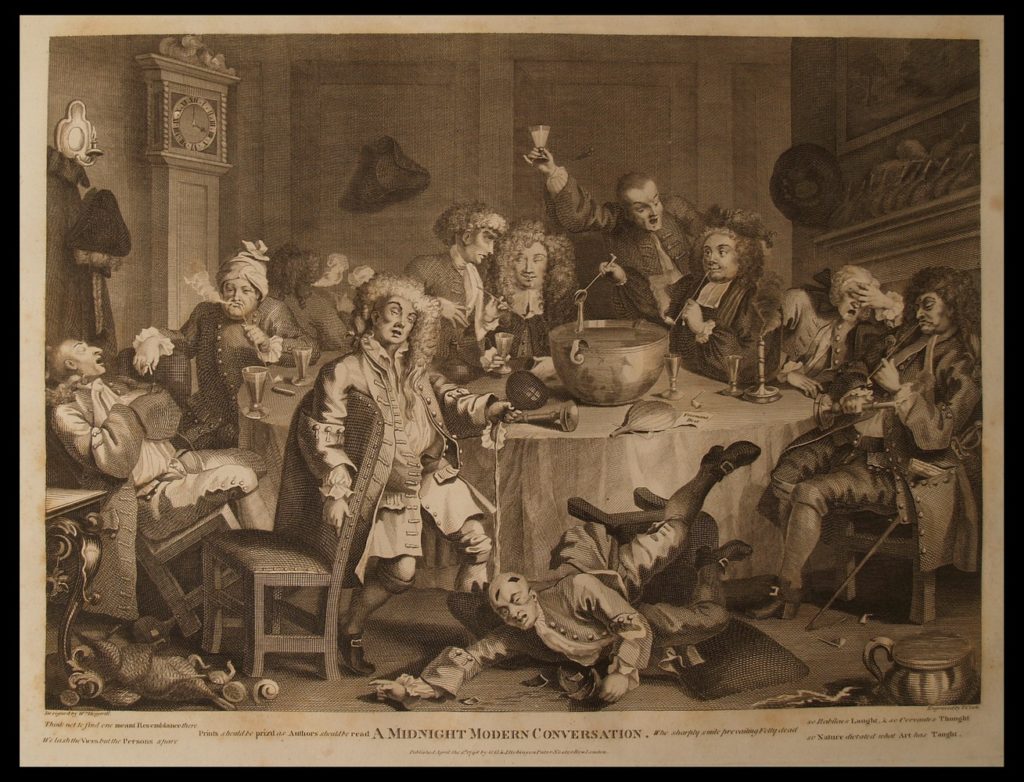 Fill it with water cool and clear:

And spoon of silver, clean and bright.

Bring forth the fragrant fruit and then,

This ode to Punch was written by Benjamin Franklin in 1737, when he was a loyal subject of the British Empire yet, and it is a beautiful example of the culture and the joy of Punch in XVIII century.

It seems that the word Punch first appeared in a letter written in 1632 by a soldier of the East India Company to a factor of the same Company. Soon afterwards, in other letters written by employees of the Company, it is explained that Punch is made from 5 main ingredients: water, spirit, citrus fruits, sugar and spices. And to this day this has remained its basic composition.

There are no consensus, though, as to who actually invented it. Some authors maintain that it was a traditional Indian drink, which the English then made their own. Others, on the contrary, believe that it was invented by a factor, that is, commission agents of the East India Company in order to better bear the boredom, the loneliness, the overbearing presence of a vast, alien world.One of the greatest experts on the subject, on the other hand, has put forward the hypothesis that it was first concocted by British sailors in the East.

Anyway, it arrived in Great Britain an conquered it. In the British social life of the XVIII Century Punch is a constant presence. The literature of the time is full of references to it. For instance, Henry Fielding has a prison chaplain say “ If we must drink, let us have a Bowl of Punch – a Liquor I rather prefer, as it is nowhere spoken against in Scripture.” And Ned Ward opined that Punch “ if composed of good ingredients, and prepared with true judgment, exceeds all the simple, potable products in the universe”

To make Punch, in India they used mostly Arrak, a spirit largely drunk all over Asia, distilled from different raw materials, including sugarcane. In Britain they first used Brandy, but soon Rum became the spirit most often used in the concoction of Punch, maybe because from that time they realized that rum is excellent for any kind of mixology.

Anyway, its massive use to make Punch improved greatly the image of rum in Britain among consumers. The point is, Punch was expensive.

In XVIII Century Britain, citrus fruits were not easy to find, they were often rotten and anyway they were always expensive. Just as expensive were spices, among which nutmeg was the most highly valued. And then, Punch had to be prepared every time in great quantity, so as to allow a large group of people attending a social gathering to enjoy it. Eventually the very vessel, the bowl, became more and more elaborately decorated, embellished with precious metals and decorative motifs. And precisely because it was expensive, Punch was largely consumed by the upper classes.

Often a group of friends, sometimes organized in a Club, gathered for a long night of revels around the Flowing Bowl, as it was called by its devotees. A real culture of Punch developed, which brought together a great number of gentlemen, adult and well-off. And women? Well, respectable ladies were debarred from it. Only non-respectable women were sometimes admitted.

This kind of party was immortalized by the great satirist (and much more) William Hogarth in his wonderful “A Modern Midnight Conversation” that illustrates this article.

But Punch was consumed in great quantities also in every kind of respectable social. It was drunk at balls and wedding, at parties etc. and in these contexts also the women drunk punch. It could be both cold or hot, made with any kind of citrus, spices and whatever else caught the fancy of those making it.

Rum, which was used to prepare Punch, lost therefore part of its bad reputation as a spirit of low quality, suitable only for soldiers, sailors and people of low class, and started to be appreciated by “the better sort”, that is, good society too.