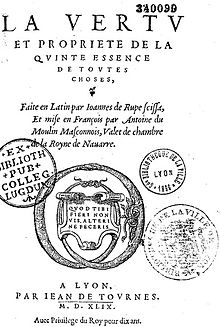 As we have seen in the previous chapters, as far as we know, large-scale commercial distillation of alcohol, that is, the practice of distilling wine to produce water of life in sufficient quantities for regular sale and consumption began in Modena, Italy at the beginning of the 13th century. The distillation of wine became common throughout Europe after this.

In the Nordic countries, where grapevines would not grow and wine had to be imported and was therefore expensive, someone began to distil alcohol from grains. In Gaelic this was known as uisgebeatha, meaning the water of life, later to become whisky.

Let’s read our Forbes again: “It seems that the apothecaries were the first to produce alcohol on a large scale. …  That they were the principal tradesmen in alcohol is clear from early police regulations such as those of the Town of Nurnberg of the thirteenth and fourteenth century, in which ‘ gebrannter wein, bernewin, brandwin, etc.’,  that is, brandy, is specified as their special product. There is no doubt that brandy was not an expensive drink used by the higher classes only before 1500 as some authors have claimed. It was consumed by all classes and its spread can be read from the regulations cropping up from time to time, for instance in Frankfurt, where we find regulations of 1361, 1391, 1433, 1456, 1487, etc. which intend to cope with the spread of drunkenness and unruly behavior of intoxicated burghers.’  … Gradually the preparation of alcohol passes from the hands of the apothecary to those of specialists like the vintner or the ‘water burner’ (Wasserbrenner), the distiller…”

Forbes also writes: “Towards the end of the fourteenth century or the beginning of the fifteenth the manufacture of spirit from corn was discovered, which meant a cheaper product in those countries where wine had to be imported such as the Low Countries, England and Northern Germany. At the same time the use of sweetened alcoholic beverages spread again from Italy, where we find recipes as early as VILLANOVA [1240-1311]. These ‘liqueurs’ and the secret of their manufacture were brought to Paris by Italian distillers in 1332. In general liqueurs consist of alcohol, sugar or syrup and some flavouring matter. … The most beloved liqueur which the Italian brought to France was  ‘rosoglio’, a liqueur with the smell of roses. From France the habit of drinking liqueurs spread, and though the amount consumed grew it remained rather a luxury.  … In the wake of the liqueurs, brandy and aquavit came to France. The art of the distillers of Modena travelled along the same road as their product to Germany, where wine spirit came into vogue in the mining industry. At the end of the fourteenth century strong spirits were drunk all over Europe …”

Moreover, we know that at the court of the Popes in Avignon, writers addressed the question of preserving the health with the water of life in the early decades of the 14th century, and that in 1330 Pope John 22nd had an alembic made to produce it. We know of the existence of a true professional corporation of distillers (ayga ardenterius) in Provence as early as 1411.

As we know, there were two basic types, right from the start: water of life simple (aqua vitae simplex) made of distilled wine alone, practically nearly pure alcohol; and water of life composite (aqua vitae composite), in which plants, roots and medicinal herbs of all kinds were added to the distillate. As well as their curative properties, these also often added flavour.

People had been drinking fermented beverages, above all wine and beer, for thousands of years for their flavour and nutritional value, but above all for the effect that the alcohol contained in them has on our minds, alcoholic intoxication. Conviviality, relaxation, joy, forgetting their daily troubles… people sought this and more in alcohol, which is why it has found such an important place in the culture and everyday lives of so many peoples.

In the early 14th century, though it was now widely available and consumed in fairly large quantities, aqua vitae was still taken primarily as a medicine, not for the effect of the alcohol it contained. But both doctors and patients soon realised that aqua vitae (or rather, the various different types of aqua vitae that were becoming available) was much stronger than wine and beer and could produce the same effects more rapidly and effectively.

We don’t know, and perhaps will never know, exactly when, where and how aqua vitae stopped being a medicine and became a drink enjoyed for pleasure, but the overall picture is clear.

Where did it happen? On the basis of what we have seen so far, we may say that consumption of aqua vitae for pleasure probably became widespread in Italy first, then in Germany and France, before spreading to the rest of Europe.

When? It’s impossible to date this event precisely, as it was a process rather than a sudden change, but we may say that aqua vitae came out of the pharmacist’s laboratory and onto the innkeeper’s table at some point in the 14th century, following the success of Taddeo Alderotti’s works and after aqua vitae from Modena became common.

Lastly, how did the custom of drinking the water of life for pleasure, along with or in place of the traditional beer and wine, originate? The merit lies with the doctors and their prescriptions: Alderotti and other physicians of his age prescribed aqua vitae not only for rubbing onto painful or diseased body parts, but above all for drinking. Physicians not only prescribed it to treat a number of illnesses, but, fascinated by its virtues, recommended drinking it regularly, every day, even when healthy, not to cure but to prevent illness, stay healthy and – dulcis in fundo – ward off old age. Drinking aqua vitae became a habit for many well-intentioned patients, and we may well imagine they quite enjoyed it. In Tuscany, an anonymous fourteenth-century author wrote a treatise entitled Ars operativa medica in which we may read of aqua vitae: “And its goodness acts not only on the body, but on the soul: it causes us to forget our sadness and anxiety, makes us merry and refreshes the intellect when we dedicate ourselves to the study of difficult and subtle matters, gives courage, helps to lessen the effects of pain and fatigue, and has many more properties of this type.” And here we are coming very close to consumption for pure pleasure.

Lastly, fear made a significant contribution to the spread of the practice of drinking aqua vitae, or rather, liquor and spirits. The Black Plague made its appearance in 1348: one of the greatest pestilences in European history, the disease killed about a third of the continent’s population, and other lesser but still terrible epidemics continued to strike all over Europe in the centuries that followed. Physicians were practically powerless, and recommended the terrified population drink aqua vitae (which many of them called aqua ardente) every day not only to treat but to prevent the Plague.

Franciscan friar Giovanni di Rupescissa wrote in his “De consideratione quinta essentia” around the year 1350: “A little good aqua ardente must be taken every morning, as much as may be contained in an eggshell; and as much may be contained in a walnut or hazelnut shell, four to six times a day, if desired. In this way, corrupt air cannot harm.”

And many people continued to drink it after the Black Death was gone.

One of the most unusual of the many types of liquor produced, at least in terms of today’s tastes, was Aurum potabile (which, more or less, we may translate as drinkable gold), a great success among the wealthiest. It was made from an infusion of gold bars or foil (or even just gold filings) in wine and then distilling it. Distillation had to be repeated to extract all the (supposed) medicinal virtues of gold and transfer them to the resulting liquor, which was universally viewed as a very powerful drug. People were convinced that drinking it regularly had numerous beneficial effects, including preservation of the body against the corruption of time. And of course its high price made it available exclusively to the upper classes.

43 thoughts on “The Origins of Alcoholic Distillation in the West: from Apothecary to Tavern”