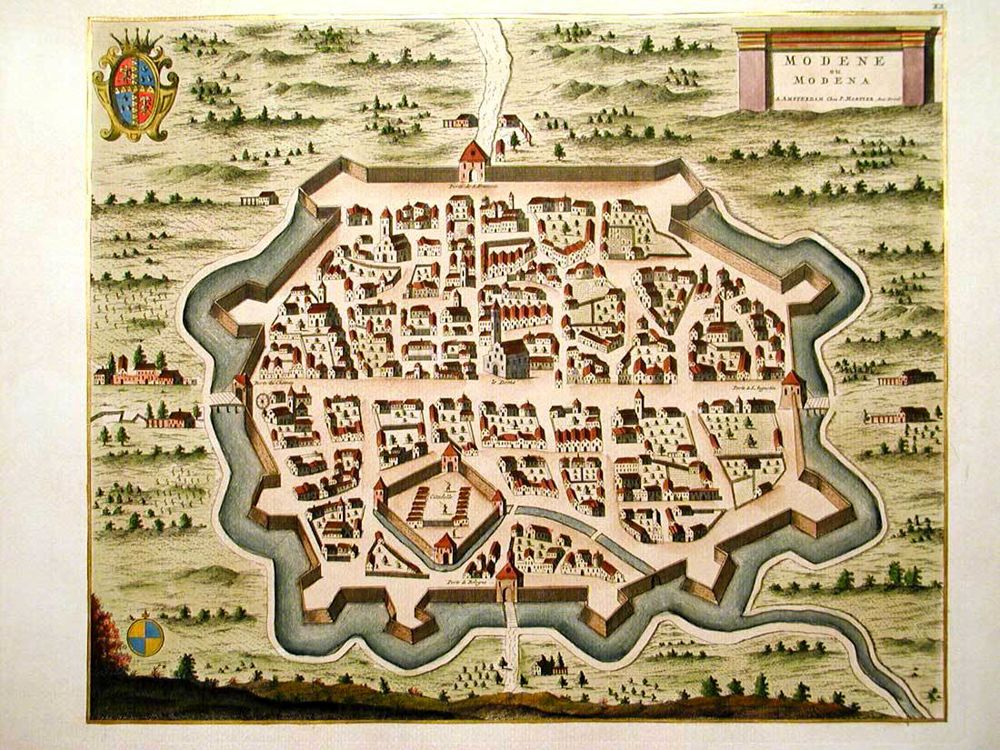 According to the ancient Romans, the genius loci was the protective spirit of a specific place; in contemporary usage, it usually refers to a location’s distinctive atmosphere, culture, skills, etc.

Founded by the Romans in 183 B.C., the ancient town of Modena is located in Northern Italy, in the Po River Valley. Modern Modena is a rich and pleasant town with a genius loci for hard work and technological excellence: suffice to say that Enzo Ferrari was born there and opened his Ferrari factory in nearby Maranello and that it is also the location of the Maserati factory. Moreover, among several delicacies produced there, Modena is also the birthplace of balsamic vinegar. Modena’s genius loci evidently has ancient roots, because, as far as I know, Modena is where we find the first traces of large-scale commercial production of aqua vitae, that is water of life.

According to a local historian, R. Bergonzini, “If the truth be known, tradition holds that water of life was distilled as early as the 11th century in the ‘apothecary’ of a Benedictine monastery in the city, though no documents have yet been found to demonstrate the truth of this rumor.” And the city’s Benedictine monastery of course had a close relationship with the famous ancient Benedictine abbey of Montecassino, which played an important role in the birth of the Medical School of Salerno, the cradle of  alcoholic distillation in the West.

Modena is not far from Bologna and has always been under its influence, especially that of its university. We know that Taddeo Alderotti made at least two important trips to Modena, in 1285 and 1288, under rather odd circumstances.  It was not unusual for a prominent physician such as Taddeo to travel to treat wealthy patients, and it was perfectly normal for him to be well-paid to do so. But these trips were different: before the trip, Taddeo signed contracts with a number of persons who were to escort him to Modena, complicated contracts involving the handover of considerable sums of money. Now Bologna and Modena are less than 50 km apart, on level ground. Of course he was traveling in the 1280s, but even then, 50 km was not far; it probably took less than a day for a healthy young man on horseback, perhaps two whole days for an elderly gentleman such as Taddeo. We know that travel was not safe in those days, but to sign two complicated contracts involving the transfer of large sums of money to be escorted for less than 50 km still seems a bit excessive.

N. G. Siraisi, in his scholarly masterpiece “Taddeo Alderotti and his Pupils” published in 1981, suspects that the two contracts actually conceal two hidden forms of usury: “By mid-1280s, when his career reached its peak, Taddeo was a man of substantial property; most of the surviving documentary records of his activity concern his involvement in various business transactions. Evidently he multiplied the wealth brought by his profession through careful investment. He acquired real estate and a mortgage, and also, it would appear, engaged in money lending. Two curious contracts regarding excursions Taddeo made from Bologna to treat patients in Modena indicate this.”

Or were they perhaps investments? We will probably never know, but Taddeo definitely liked business. Siraisi notes: “Presumably Dante had good reason to select Taddeo as a type of worldly ambition, as contrasted to Saint Dominic, who acquired learning from purer motives. … Moreover, in his will he was careful to provide that some of his charitable bequest be invested so that the beneficiaries might enjoy the fruit and return.”

Just after these trips, we have certain information about the production of water of life in Modena. According to economic historian M. Cattini, “From the Lombard cities came iron in rods and metal tools for working the fields, wool cloth and cheese. In exchange, Modena provided cattle and swine, barrels of wine and water of life, raw and worked hides, lumber for construction and charcoal.”

There is, of course, no proof, but I like to think of a start-up in the 1280s arising out of the encounter of Taddeo’s scientific research and technical innovations with the traditional know-how of unknown Modenese craftspeople who were perhaps already distilling small amounts of water of life by slow, costly, traditional methods. A new enterprise that, for the first time in known history, manages to produce significant quantities of water of life (let’s remember that it was almost pure alcohol) of good quality, at a relatively low price. In short, making it into a commercial product to be sold on the market.

And now let’s read some quotes from our Forbes.

“ …the Middle Ages bring the discovery of the mineral acids and alcohol. … Gradually we see that the center of the chemical industry is shifted from the monastery and the home of the private artisan to a real industrial center or to a chemist’s shop. The rising capitalism of the later Middle Ages lead to a concentration of those trades which formerly formed part of the housework or belonged to the monk’s work. The earliest centers of the industries that concern us here were situated in Italy (Salerno, Venice and the Po Valley).”

“… distilling became more or less an industry, first in Italy, where we find a burgher of Modena producing larger quantities of alcohol for sale as early as 1320.”

“ …at the same time distilling became more or less an industry, first in Italy, where we find a burgher of Modena producing larger quantities of alcohol for sale as early as 1320.”

“Apart from the old centers of Modena and Venice, which exported large quantities of distillates not only to Germany but even to Turkey, other local centers of distillation of wine or fermenting of corn, barley etc. were formed.”  “Brandy was imported into England by the Genoese from the fourteenth century.”

“Testimony of this ‘first’ for Modena comes from afar. From Germany, in particular, where a series of surprising documents attribute to Modena the merit for production of water of life as early as the beginning of the 14th century. It is certain that at the start of this century they were already exporting discrete quantities of distillate beyond the city boundaries, and over the Alps to Germany via Venice.” (Bergonzini)

In a manuscript of 1320 the Burgermeister of the German city of Frickenhausen invited citizens to use the distilled wine imported from Modena as an effective defense against the plague and other common contagious diseases.

In the same years, Ludwig the Bavarian came down to Italy to be crowned Emperor by the Pope in Rome. Modena, like other Italian cities, initially welcomed him with all due honors. Then things changed, but this is not our concern here. Ludwig brought with him a German physician, Hieronymus Burkhard, who stopped in Modena to study the distillation method for water of life, already renowned in Germany. Burkhard spent a considerable amount of time in the city, and later, in 1351, received permission to open the first two Pharmacies in Berlin and the nearby Collin on Spree, with an imperial license authorizing him to distil water of life the way it was done in Modena.

Then came the taxes, the nightmare of all distillers over the centuries, which are however useful to us as proof of the existence of widespread production and sale of water of life in Modena. The 1487 Statutes of the town, reformed on the basis of those of 1327, establish a tax of three “soldi” to be paid to export a certain amount of water of life to any foreign country, clearly demonstrating the existence of a consolidated business of production and sale of the distillate in the city.

Lastly, F. Brunello writes in “History of water of life” (“Storia dell’ Acquavite” 1969), “How and when alcohol became a popular beverage in the form of aqua vitae or liquor, we do not know with precision; it is however certain that water of life was already traded in Italy in the 14th century XIV, and significant quantities were being traded over the Alps.”

To conclude, as far as we know, large-scale, commercial alcoholic distillation – that is, the practice of distilling wine to produce water of life in sufficient quantities for sale, consumption, export and taxation – began in Modena, Italy, around the year 1300. And, if I may be allowed to add a personal note, I cannot help being proud of this Italian First.

We shall see in the next article.