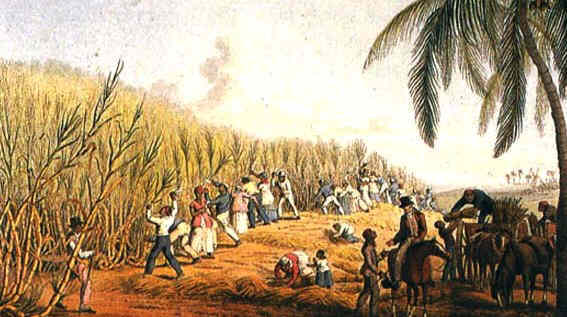 What is rum? Rum is a strong alcoholic beverage made by the fermentation and then by the distillation of the products of sugar cane: cane juice, molasses, skimmings etc.

It may be useful to remember that fermentation is the process by which microorganisms called yeasts feed on sugar, releasing alcohol, gas and heat. Fermentation is a natural, spontaneous process: for example, when fruit rots it often ferments. It was later gradually improved by men for their own ends, let us say that it is a relatively easy thing. When America was discovered, in Europe, Asia and Africa the production of fermented beverages had been commonplacefor thousands of years: wine, beer, etc.

The raw materials of rum are the coproducts of sugarcane: sometimes sugarcane juice, but mostly molasses, sometimes even syrups. The raw materials are put into a fermentation wash, to which water and other substances are added. Originally, the fermentation would happen owing to the yeasts naturally present in sugarcane, in the soil, in the air, and so on: it was a spontaneous process which man was unlikely to be able to influence, whereas today specifically selected yeasts are used, the whole process is monitored, by adding or removing nutrients, modifying the temperature, and so on. The production of alcohol takes place entirely during the fermentation process.

Alcoholic distillation, on the contrary, does not exist in nature, it is an artificial process, devised and realized by men. And it is difficult. The fermented liquid, or wash, is put into a container, pot-still or column-still, and heated until it boils and produces vapors. The vapors are then collected, cooled and brought back to a liquid state. At the end of this process, in the liquid produced, the spirit, there will be a much lower percentage of water than what was present in the fermented liquid, whereas the percentage of alcohol will be much higher. We have therefore produced an alcoholic beverage that is much stronger than any fermented liquid, which is exactly the desired result. To put it simply, distillation concentrates alcohol. For the sake of clarity, I’ll say that again: distillation concentrates the alcohol already present in the wash, it does not produce it.

According to some archeological remains the distillation of alcohol was made in present-day Pakistan as early as c. 150 B.C. and from there it spread later in south-east Asia and China. There are also some uncertain references in Indian literature that could push back its origins to c. 500 B.C. But this is not our point here. As far as we are concerned, it is more or less generally accepted that the history of distillation starts in the West with the Greeks of Alexandria before the Christian era. Later the Arab alchemists used distillation for studies and research of various kinds, and for making perfumes and maybe also to produce alcohol for medicinal use. In the XII century, it is thought to have reached Italy at the famous medical School of Salerno, where it was used to distill wine, creating a new, wonderful beverage, an almost pure alcohol called in Latin aqua vitae – water of life – from which derive the Italian acquavite, the French eau de vie and also the Gaelic uisgebeatha, later whisky. But, as far as I know, the earliest description of an alcoholic distillation can be found only about a century later. It is again from Italy, in the book Consilia by Taddeo Alderotti, a famous physician and scientist who was born in Florence, but lived in Bologna in the XIII century. It then spread all over Europe, but usually in limited quantities, quite expensive, that doctors and pharmacists dispensed to their élite customers. “Est consolatio ultima corporis humani” (“Last solace of the human body”), Raimond Lull will write later. Anyway, scholars agree that the first use of alcohol was medicinal.

Over the centuries, all over Europe people started to produce distilled beverages not only as a drug but also as a beverage for pleasure consumption. For example we know that in 1514 the King of France, Louis XII, issued a decree with which he granted the Guild of “vinagriers” (vinegar makers) the right to distill wine to produce brandy. And this is an important step in the long process which has transformed distillation from a mysterious activity, restricted to alchemists and pharmacists, into a mass production for the pleasure of drinking.

There isn’t a general consensus among scholars, but it seems to me reasonable to think that large scale commercial production of distilled beverages meant for drinkers’ pleasure consumption started in Europe, probably in Holland, in the second half of the XVI century. Holland was at that time the most modern and technologically advanced country in Europe and the very word brandy is thought to derive from the Dutch gebrande wijn, which meant, basically, burnt wine. And we know that a John Hester started his “Stillitorie” in London in 1576 with this advertisement: “These Oiles, Waters, Extractions or essences, Saltes, and other Compositions; are at Paule Wharfe ready made to be soldem by IOHN HESTER, practisioner in the art of Distillation; who will also be ready for a reasonable stipend to instruct any that are desirous to learne the secrets of the same in few dayes”.

The new importance of distilled beverages is reflected in the foundation of Guilds of distillers. The London Worshipful Company of Distillers was founded in 1638 and in the same years similar Guilds were born in Paris, Rotterdam and elsewhere. However, the distillation of wine continued to be expensive. Even producing alcoholby distilling grain was costly, and it was dangerous too: cereals were the staple diet of the majority of the population and harvests were often poor. Therefore, diverting a significant share of the harvest from food consumption to distillation increased the risk of hunger and famine. In any case, distillation was seasonal, it was done after the harvest and before the raw material could deteriorate.

Brazilian and Caribbean sugar plantations changed the situation radically. Sugarcane provided distillers with plentiful, cheap raw material. Molasses in particular was extremely cheap: actually, before it started to be used to produce rum, it was largely thrown away. Rum, our rum, was born when European distillation techniques met sugarcane and this meeting took place in the Americas between XVI and XVII centuries. But where exactly, and when?

We will deal with this issue in the next article.

2 thoughts on “American Rum: a New Spirit for a New World”