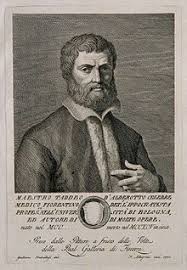 Taddeo Alderotti is, in my opinion, a key figure, perhaps the key figure, in the origin of alcoholic distillation in the West.

Also known as Alderotto, Thaddeus florentinus, Tadio, and by other versions of his name, he was born in Florence around the year 1210 and died in Bologna, probably in 1296.  Living more than eighty years was exceptional at that time, and it is possible that Taddeo may have encouraged the idea that he was older than he really was in order to boost his reputation as a physician.

Around the year 1260 he began teaching at the University in Bologna, where he was one of the first to consider medicine a true, highly respected academic discipline and introduce Aristotelian logic to medical theory, obtaining for professors and students of medicine all the privileges that had hitherto been reserved for students of law. We know that he was very close to the Franciscan friars in Bologna, but it is hard to say whether this preference corresponded to a personal sentiment or should be viewed in the context of a special partnership between the Franciscan order and the study of medicine. In any case, his students continued this process of innovation and brought the new medicine to Europe’s greatest universities.

He was very famous in his day and is mentioned in a number of works. Popes and lords asked to be treated by him, while the cities of Perugia and Venice attempted to lure him away from Bologna to take up residence there. Physicians and academics continued to read his works for centuries: Michele Savonarola referred to him as “gran Tadio, gran medego” (“great Taddeo, a great physician”) around 1450.

Taddeo was a man of science, but also notoriously very much interested in money, and as his fame grew, his bills became very high, scandalizing many of his contemporaries. His alleged love for profit, earned him the dubious honor of being mentioned by Dante Alighieri, who may have met him in person, as a negative example of someone who pursues knowledge for the sake of wealth and worldly honors, not out of true love of the truth. The Harvard Classics, Paradise  XII 76-79:

In any case, he became very rich indeed, and in addition to practicing as a physician, he invested in property and even granted loans. He was also very interested in aqua vitae (water of life), that is alcohol, which, as we have seen, physicians and alchemists had been producing for some time, though it was not yet known to the general public.

Over the course of his long life Taddeo wrote a number of works, the best-known of which is his book of medical prescriptions and advice, Consilia. which was a great success for many years and gave rise to a true genre of medical writing. According to N. G. Siraisi in “Taddeo Alderotti and his Pupils”, “A consilium, as the name suggests, purports to be professional advice written down in response to an individual request for counsel. A good many consilia have reached us in a form that suggests they have undergone considerable editing. The publication of the names of noble patients gives rise to the perhaps unduly cynical supposition that another purpose in forming a collection of written consilia was do advertise the expertise and the distinguished clientele of the physician who treated the case.”

His last seven consilia were all dedicated to aqua vitae, which he also refers to as aqua ardens (burning water), hence the origin of the modern Spanish and Portuguese words aguardiente and aguardente.

These seven consilia are quite different from the others. Let us return to Siraisi:“The consilia of Taddeo and his colleagues seldom or never give any indications of the outcome of a treatment, and provide only occasional glimpses of the level of expectations of physician or patient.  In one famous instance, however, Taddeo abandoned his usual reserve in order to endorse a medicinal substance in the warmest possible terms. As is well known, he devoted no fewer than seven consilia to the manufacture and manifold virtue of alcohol distilled from wine. Drawing upon the process and techniques of alchemy, he described distilling equipment and gave directions for its use; he also noted with approval the capacity of distilled alcohol to absorb the flavors of fruit, herbs and spices stepped in it, and he gave his readers several recipes for cordials. … The capacity to distill spirits was a relatively recent accomplishment in western Europe in Taddeo’s day; so Taddeo’s enthusiasm for aqua vitae is no doubt partially explained by his novelty. His consilia on the subject are striking but scarcely historically unique examples of the praise of a new panacea that closer acquaintance would reveal as not without drawbacks. Yet it is also clear from his encomium that he found alcohol to be much more noticeable in its effects than most other medicinal substances known to him; the limited results produced by and expected of most medieval herbal remedies is nowhere more clearly revealed than by Taddeo’s sense of the contrasting and much more greater effectiveness of ardent spirits.”  In short, aqua vitae truly worked.

The seven Consilia Taddeo dedicates to distillation and aqua vitae ought to be seen as a true compendium of the state of knowledge on the subject. Let us take a brief look at what he considers to be the virtues and benefits of aqua vitae:

“These are the virtues of aqua vitae: first of all, it treats and eliminates, from inside or outside, all forms of bodily suffering proceeding from cold humors. From the inside, by drinking a certain quantity of it, or when applied on the outside. The quantity of the beverage to be taken is the amount that may be contained in a hazelnut shell, with a glass of good white wine. The same quantity may be applied externally. If you add spices or herbs, mince them in this quantity, and in two hours it will take on their flavor and virtues. And then it is highly effective against cold drops from the eyes, applying a little to the outside of the eyes, or putting a drop in the corner of the eye.”

A long list of illnesses that may be treated with aqua vitae follows: it cures fevers of all kinds, corrects “fetid breath”, slows balding, treats the falling sickness, the eyes, paralysis of the limbs, kidney and bladder stones, deafness, toothache, dysentery, sciatica and many more ailments. “And then it makes wine that has gone off better, if a little is added”.

And as if this were not enough, aqua vitae preserves the vigor of youth and deters aging, including white hair. Revealing that the desires of men and women have not changed much since 1280!

Lastly, aqua vitae not only treats ailments of the body, but of the spirit too: “Against melancholy and sadness, half a spoonful every morning, on an empty stomach, taken with a glass of fragrant wine, will cheer and make merry and playful”.

He also clearly describes how the alembic must be made. His long, detailed description begins like this: “To make aqua vitae, also known by the name aqua ardens, have two copper vessels made, one shaped like a gourd with an alembic in which rosewater is distilled, with the exception that this container must be all of one piece, with no channel inside it. It must however have a spout; there should be a large hole, the size of a finger, in its top, through which to introduce the substances to be distilled; the other recipient should be like a gourd without an alembic, exactly the same, containing a closed serpentine channel winding all the way from top to bottom…  and all must be well-greased and sealed, so that it cannot breathe, with clay made from quicklime and egg white”.

To obtain the best aqua vitae – practically nearly pure alcohol – Taddeo recommends using the best wine available and distilling it repeatedly, up to 10 distillations! But in actual fact, he writes, for reasons of economy and practicality, 3 or 4 distillations are normally considered sufficient. A long, detailed, concrete description of how to distil and how much liquid should be obtained each time follows, with a series of technical instructions that can only be the result of years of practice. For example, he specifies that the alembic must not be filled all the way, but only up to a maximum level of half, and this detail, like others, suggest that he has direct experience of the art of distillation, not just book knowledge. Taddeo was evidently an experienced distiller of aqua vitae.

According to Forbes, “Essential in his apparatus was the spout of the alembic (‘which should be of the length of an arm’) and the ‘canale serpentinum’ which he advises to be used with a cooling trough and a regular supply of fresh cooling water. Thaddeus was therefore the pioneer of the method of cooling the distillate after it had left the still-head and he thus paved the way for the modern method of cooling the vapors outside instead of inside the still-head and collecting the distillate in the alembic itself. In fact this method was the only efficient way of producing low boiling distillates like alcohol.”

Taddeo Alderotti and his fame played a decisive role in making the general public of cultivated readers of the day aware of aqua vitae. We might say he was a propagandist of this new product and very much aware of how much it could yield in strictly economic terms.

Taddeo and other physicians of the day recommended spreading aqua vitae on ill or painful parts of the body, and above all drinking it. They suggested consuming it both pure and mixed with spices and medicines, which often improved its flavour. They clearly prescribed drinking it regularly to treat numerous illnesses. But they also suggest drinking it when healthy, to prevent illness, keep the body healthy and slow down the process of aging. Many people therefore began to drink it regularly, and consumption grew significantly.

Put in modern terms, a new form of consumption appeared on the market, which could no longer be satisfied by the small quantities produced with so much time and trouble by the physicians and alchemists. Something new was required: a true commercial undertaking producing the required quantity at a reasonable price. Someone realized this and took action to respond to this new demand among consumers. This did not happen in Bologna, but nearby, as we shall see the in next article.