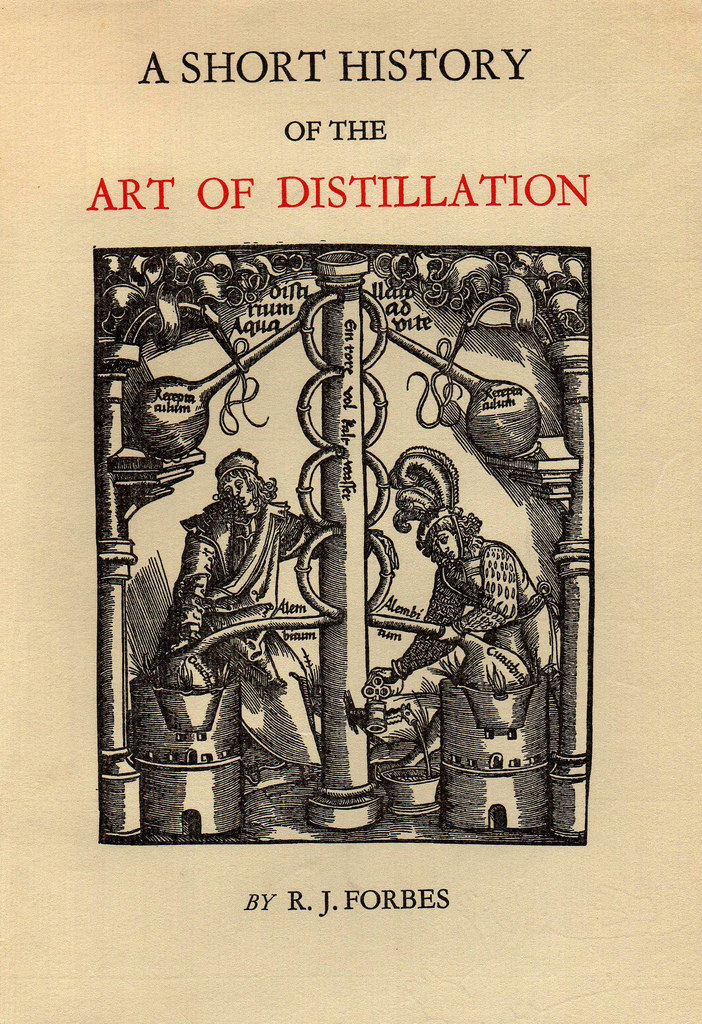 The readers of GOT RUM may remember that in the past I published a series of articles titled “The Origins of Rum: A Quest” At the end of my research I reached the conclusion that, as far as I knew, the Origins of Rum in the West were to be found in Brazil in the first half of the XVII century. (See the last article of that series  in GOT RUM?  August 2015)

When studying the origins of rum, I had to deal with the origin of alcoholic distillation in general and this issue fascinated me. So, after concluding my research on American Rum, I decided to take up a new Quest, this time about the Origins of Alcoholic Distillation in the West.

“Distillation is an art and even an ancient one. It is strange to find that the history of this oldest and still most important method of producing chemically pure substances has never been written. … a proper history of the art from its origin up to the present time was lacking.”

With these words R. J. Forbes  begins his “Short History of the Art of Distillation”, written in Amsterdam in 1944 and published in 1948. A valuable book, available today only thanks to the American Distilling Institute that has republished it.  The subject of Forbes’ book is distillation in general (perfumes, metals, dyes etc), not only alcoholic distillation, which is what interests us. In any case, Forbes is necessarily our starting point. It is an interesting, learned book, brimming with information, but not easy to read. Besides, it is inevitably dated, since the sources available at the time were scanty. In particular, hardly any of the many Arabic works on the subject were accessible. Yet, this is the only organic text on the history of distillation the general public has at their disposal, which means that if you visit Amazon.com and digit “history of distillation”, only this title will come up.

This does not mean that no new texts have been written on the subject since 1944. The world is full of Universities and research bodies and undoubtedly there are many other studies and academic papers  on alcoholic distillation. But they have remained largely confined to comparatively limited circles (scientific journals, academic conferences and such like) without reaching the large public of aficionados. Then, naturally, there are plenty of texts written to enhance the marketing of this or that company, this or that product. They are easy to find, but usually rough-and-ready and unreliable. Anyway, as far as I know, no one else, after Forbes, has published an organic history of alcoholic distillation.

Well, so this is our starting point, the awareness that about this theme – the Origins of Alcoholic Distillation in the West – very little is known and we are, so to speak, sailing in the open sea. We have to search ourselves for little-known sources and documents and reflect on the historical context, in the hope of reaching valuable conclusions. With little help from secondary literature. It was the same with the Quest into the Origins of Rum. It is laborious and errors cannot be ruled out, but it is also thrilling, true historical research.

But before continuing, it is a good idea to clarify the purpose and the scope of this New Quest.

Since I began my studies into the origins of rum,  I have learned that at the beginning, maybe in the XI century, alcohol was produced by distilling wine, which makes sense, as wine was by far the most popular alcoholic drink. Distillation was a complex procedure, difficult and costly, done by pharmacists and alchemists. After great effort, toil and expenditure, they managed to obtain small quantities of a strange, colorless, burning liquid that today we call alcohol, but to which they gave the Medieval Latin name “Aqua”, that is “water”. Later, fascinated by  this prodigious liquid, someone called it “Aqua Vitae”, “Water of life”, and the name stuck.

For a long time alcohol was used only as a medicinal drug, or in scientific and alchemic experiments. According to some scholars the shift of alcohol from a drug to a common beverage for pleasure consumption occurred only in the first half of the XVII century. When, two years ago, I wrote my book “American Rum” I put the date backward to XVI century Holland.

But historic research is a work in progress and now I think that in the West, commercial production of alcohol on a large scale was, almost certainly, an Italian invention and  it happened as early as the XIV century. I hope I will be able to explain and support this conclusion in the next articles.

For the sake of clarity I will repeat it: commercial production of alcohol on a large scale in the West. Yet again, as was the case with rum, we are not looking for attempts which were not followed through, or experiments, even intriguing ones, which remained isolated. We are not interested here in the discoveries of some individual apothecary, doctor, alchemist, monk, craftsman etc. which died with them or with their close disciples, without yielding long-lasting fruit. We want to find out when, where and how selling and consuming Spirit Drinks became an ordinary thing.

We want to discover the moment, the place and perhaps even the people that gifted to us the decisive passage of alcohol from an apothecary’s laboratory to the tables of a tavern, paving the way which leads to us.

This is all for now, see you again in the next article.

PS: I wrote “almost certainly” for a reason. We shall return to it at the end.

PPS: i published this article a few months ago on the “Got Rum?” magazine. If you want to read my articles and to be constantly updated about the rum world, visit www.gotrum.com

6 thoughts on “The Origins Of Alcoholic Distillation In The West: A New Quest”